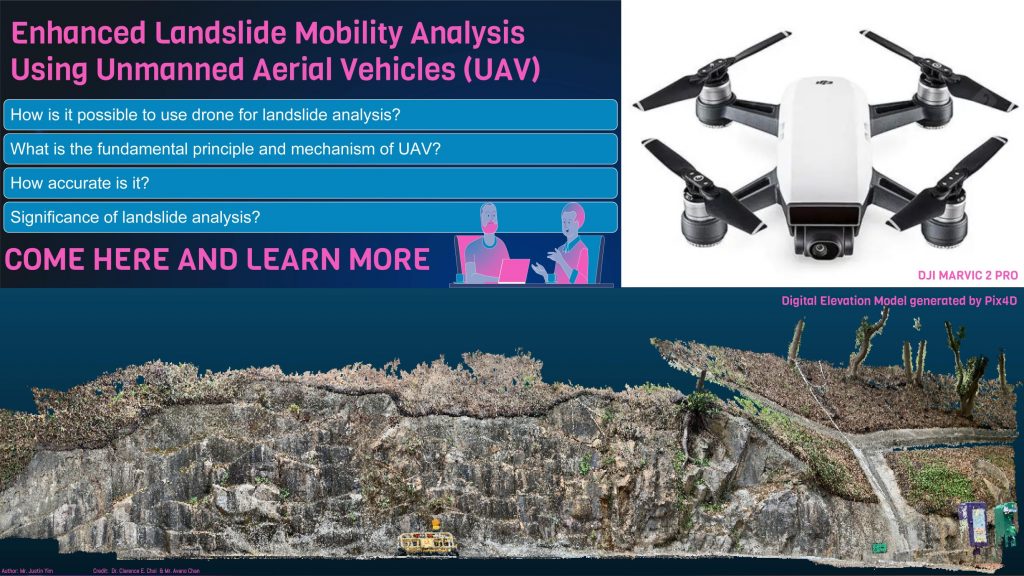 Unmanned Aerial Vehicle is a remote sensing technique utilizing photogrammetry for inspection, surveillance and modelling issues. The application of UAV as a surveying tool allows geotechnical engineer to capture topographic data for landslide suspected site is relatively new. It is advantageous to adopt UAV technique to inaccessible natural terrains and unstable slopes which have repetitive failures. Those useful data would be extracted for further landslide analysis, and is particularly applicable for debris flow runout analysis which is sensitive to the topographic profile. Computed result shows UAV resolution accuracy with less than 20mm. This project evaluates the resolution of UAVs and compares their applicability for post-landslide mobility assessment by 2-Dimensional Debris Mobility Model (2D-DMM). 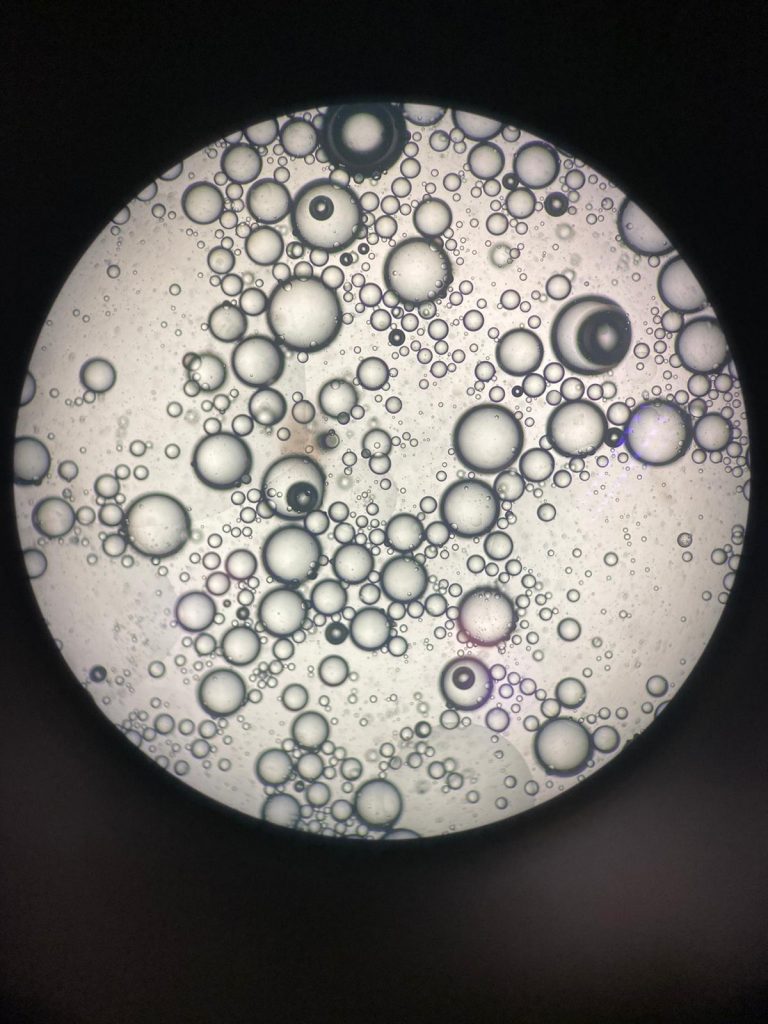 Foundation quality is of paramount importance to all civil engineering works. Since it governs the safety of the structures and buildings stood above it. However, settlement in foundation is found very common, in which it comes as a natural deterioration process. Maintenance work for foundation can be challenging and costly. Having said that, inspired by the adopting of self-healing capsules in concrete improvement, this study aims to mimic and incorporate similar self-healing technology in strengthening of soil. 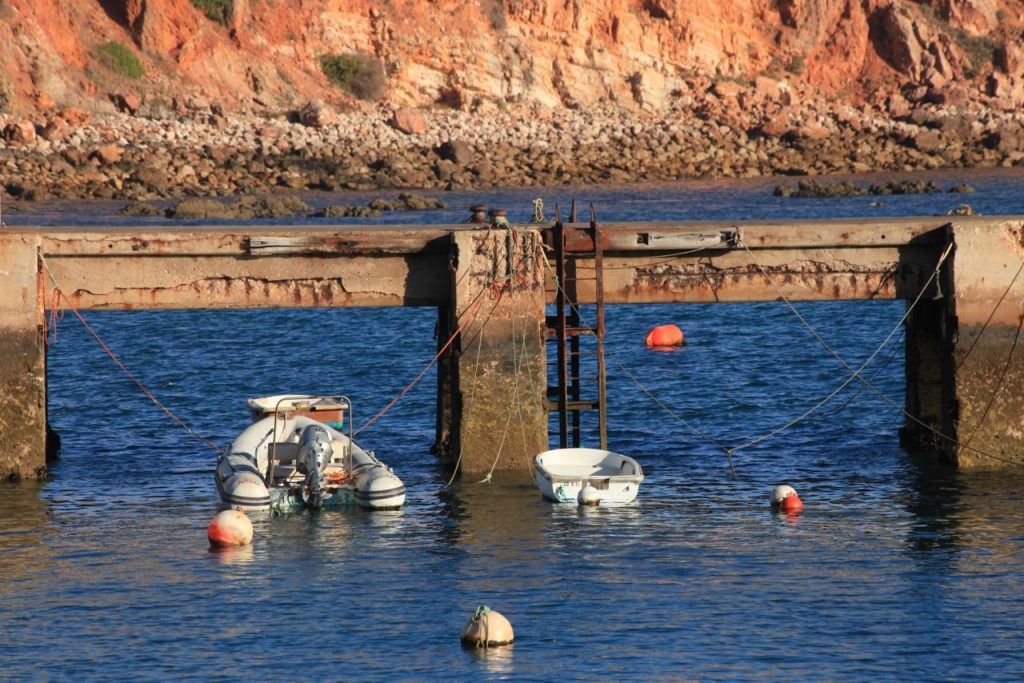 Chloride attack of concrete in particular for marine structures is a serious global issue where it can lead to severe deterioration of the concrete, drastic reduction in strength of structures and safety concerns. The world is urging for a remedy to this situation. A green alternative to Ordinary Portland Cement (OPC), Alkaline-activated Slag (AAS), is found to be having 70%-150% higher chloride binding capacity than that of OPC, making it a potential antidote to this issue. This project aimed to analyse the chloride resistance of AAS in the marine environment, to provide better predict the service life of marine structures and to find ways to enhance the durability of concrete in aggressive conditions. With AAS, let us ‘cement’ a sustainable future. 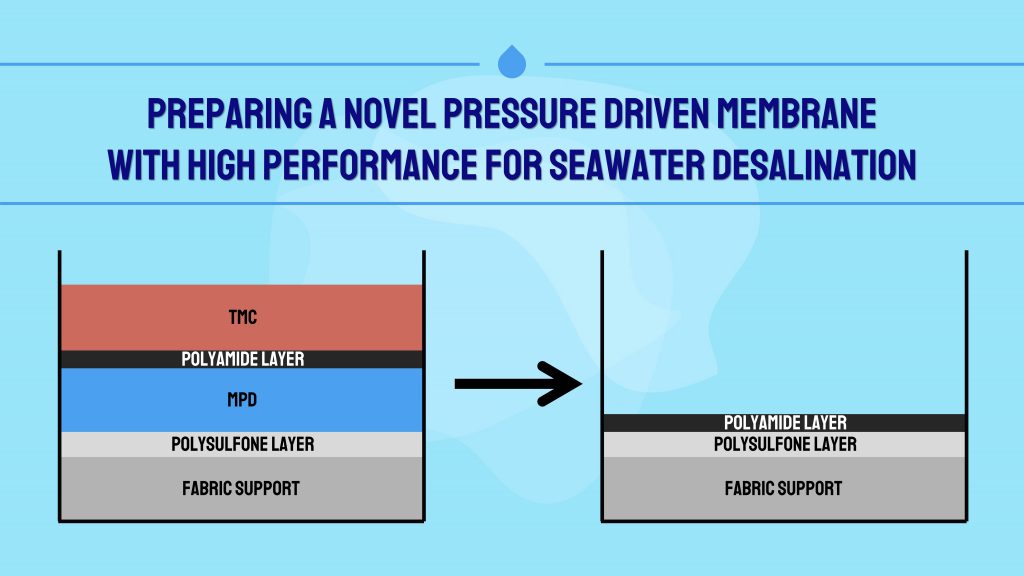 Seawater desalination offers the vast potential of producing unlimited clean water. Membrane-based desalination technologies can be used to produce alternation water source. Reverse osmosis (RO) is regarded as a reliable technique for seawater desalination. Most RO membranes have a thin-film composite (TFC) structure, and the performance of the membrane is predominantly determined by the physiochemical properties of the polyamide (PA) layer. The performance and the formation mechanism of the PA layer have been intensively studied in recent years. This project aims at fabricating the TFC membrane using a support-free IP reaction, and to explore the formation mechanisms of the PA layer in the SFIP reaction system. Results show that the performance of the fabricated RO membranes is satisfactory. 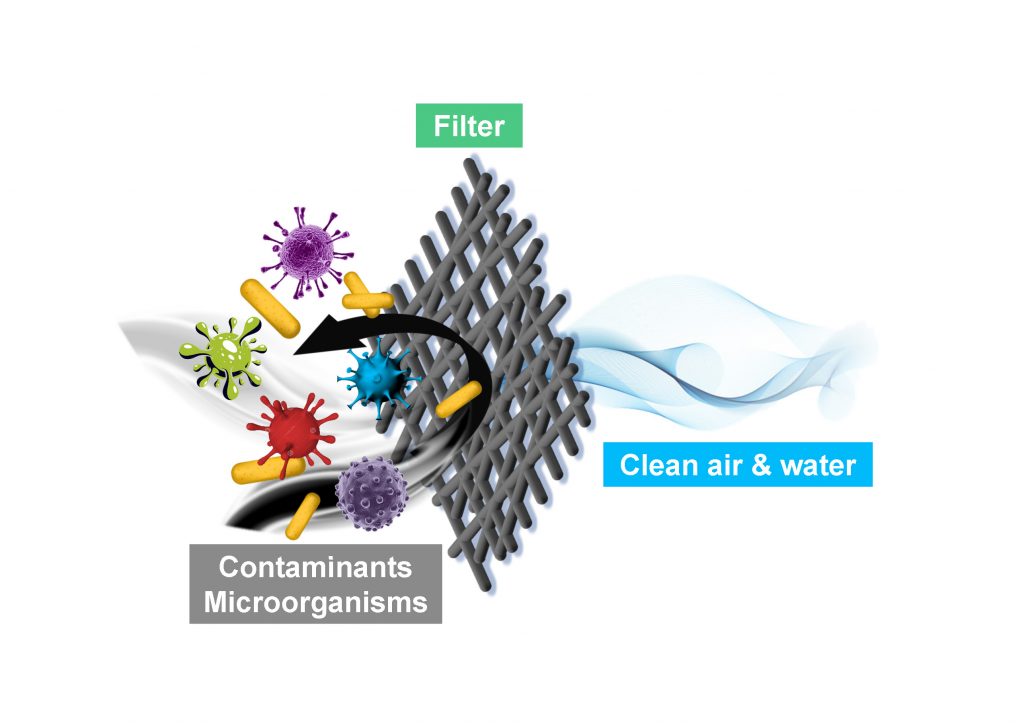 Our team developed highly efficient nanofibrous membrane filters for different environmental applications, including water and air purification. We utilized electrospinning as a platform to fabricate functional nanofibrous membrane filters for pollutant removal, including heavy metals, particulate matters, etc. Thanks to the high porosity of nanofibers, the filtration consumes almost zero electricity without sacrificing efficiency. Moreover, after saturation of contaminants, the filters can be easily regenerated by simple washing with daily accessible agents like citric acid and ethanol. The project aims at offering a more sustainable and healthier lifestyle for modern society. Thus, commercialization opportunities are highly welcome. 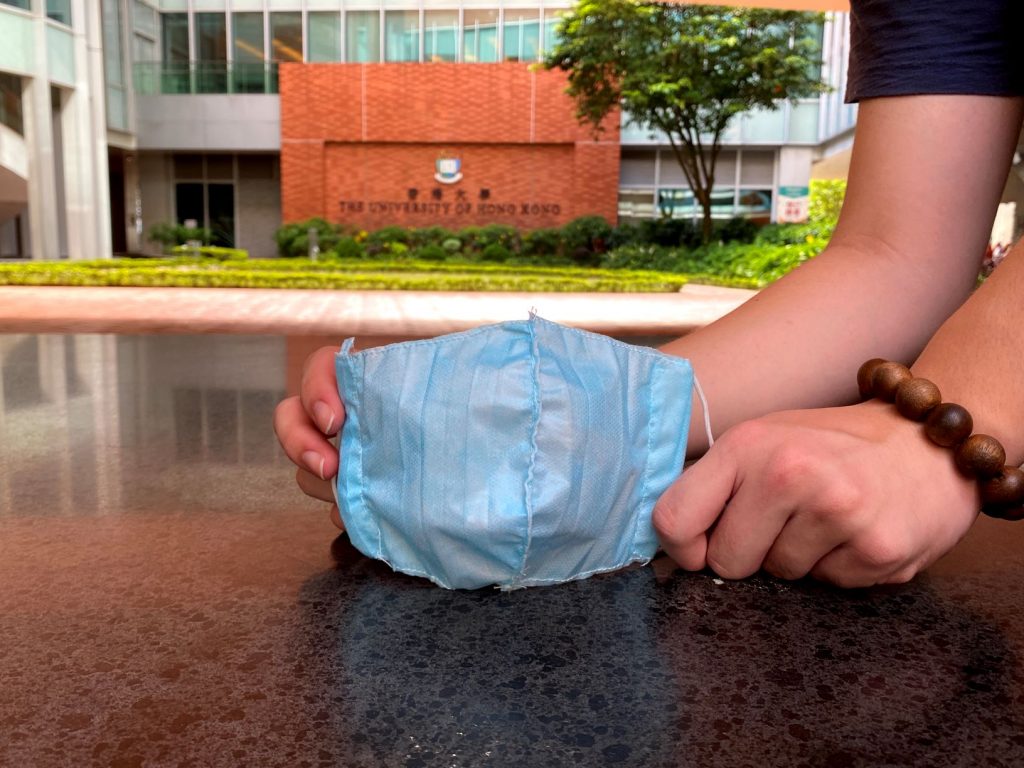 The project aims to develop a reusable face mask filter using nanofiber technique to relieve the social and environmental burden caused by current one-time using face masks. The filter consists of electrospun nanofibers with much smaller diameters (e.g., nm level), which are much smaller than the commercial filter fibers (e.g., µm level). The developed nanofibrous filter has high air filtration efficiency without sacrificing the breathe comfortability, which can be attributed to its high porosity and improved physical structure. The filter design is also highly flexible to incorporated with other physicochemical methods for further improvement of the filter properties. An impressive feature of this invention is the reusability. Simple chemical washing can regenerate the exhausted filter for further reuse with maintained high air filtration performance. 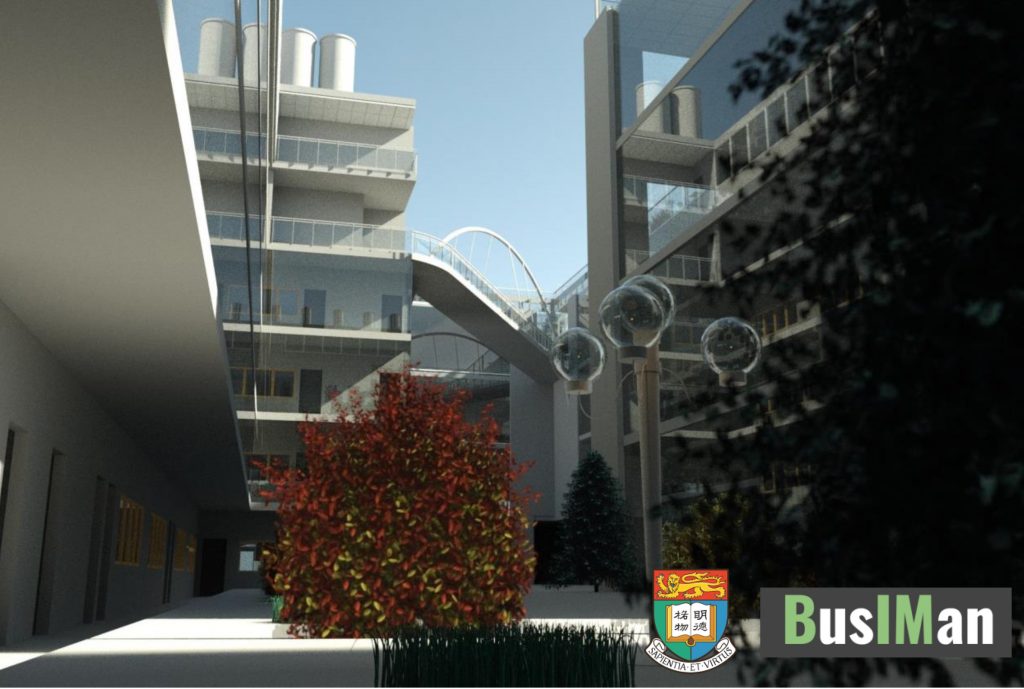 The development of Building Information Modelling (BIM) technology has reshaped our construction industry in many aspects throughout different stages in the project life cycle. Our team, BusIMan, has learnt more about the practical usages of BIM through this competition with our collaboration.
The designed complex is dedicated to the Digital Design & Construction Centre (DDCC). Our design comprises two buildings (South Wing and North Wing) linked by an arch bridge (“The Link”) with a podium underneath. This forms a shape of “CIC” when browsing on the plan view. An iconic bridge (“The Wave”) extends from the complex to the adjacent building, transforming the complex into a district icon. With aesthetic considerations and segmented zones for different facilities type, the complex aims at providing a desirable learning space and a professional working environment. 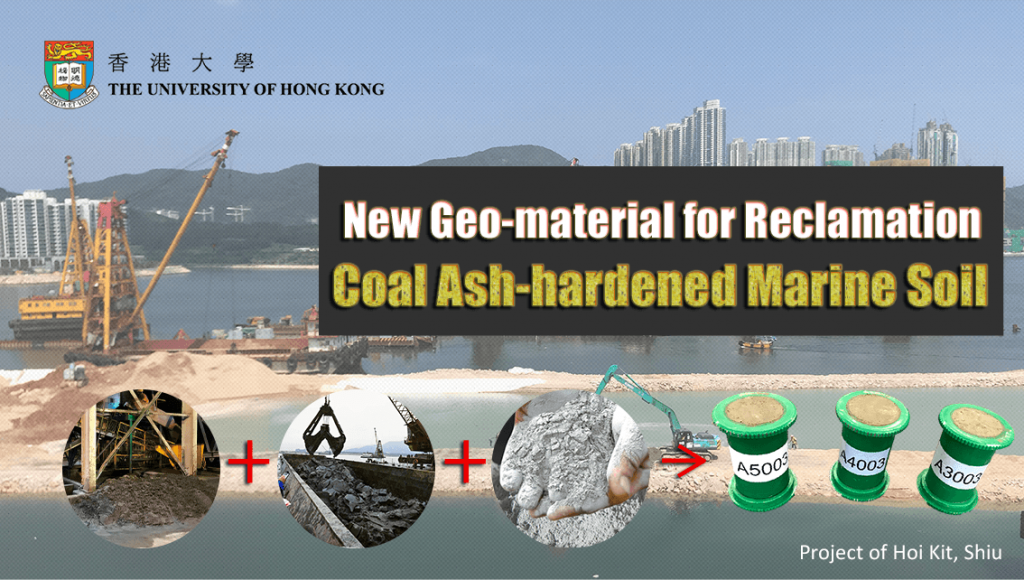 Extensive reclamations such as the Airport 3rd Runway System, Tung Chung New Town Extension and the Lantau Tomorrow Vision are proposed and these megaprojects require over 500 million tonnes of backfilling material. However, local fill banks only provide less than 10 million tonnes yearly. In order to alleviate the shortage, this study aims at producing a new geo-material by hardening soft marine soil primarily with coal ash generated from power plants.

The result shows that water to stabiliser ratio and the curing duration are the key strength-contributing factors. It was also found that the unconfined compressive strength of hardened soil is nearly proportional to its deformation moduli. These showed that coal ash is effective yet economic for hardening marine soil.

Efficient collaboration of data is essential for successful project delivery of
Building Information Modeling (BIM), which mainly relies on its visualization performance. VR technology can extend the advantage to create a more engaging and realistic environment for every stakeholder. As a large number of software for BIM and VR computing are available on the internet, it is vital to find the most effective workflow to transfer the project from modeling tool to the VR engine.
In this project, we would explore the performance of different software and hardware to find the best solution to BIM-VR collaboration workflow.