Breeding the next generation of robotics.

Previous
Next
About us

We are BREED HKU, a student group committed to developing and promoting bio-inspired technology.
​Our flagship VAYU project – the world’s fastest robotic fish – and our upcoming initiatives such as our robotic dog aim to educate and enhance awareness in the general student body.

Using designs perfected by millions of years of natural evolution, we adapt selected features to increase the effectiveness of man-made robots. 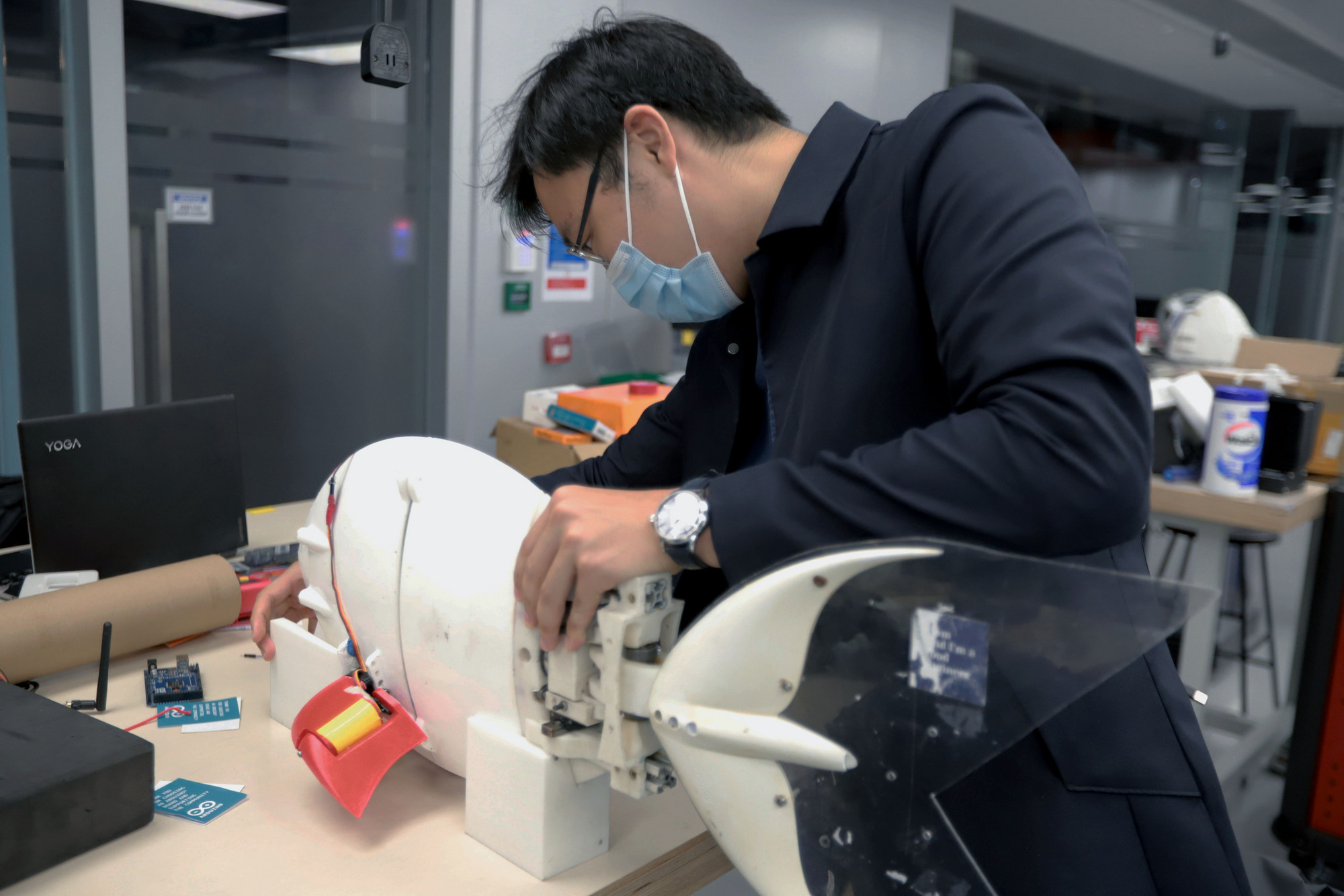 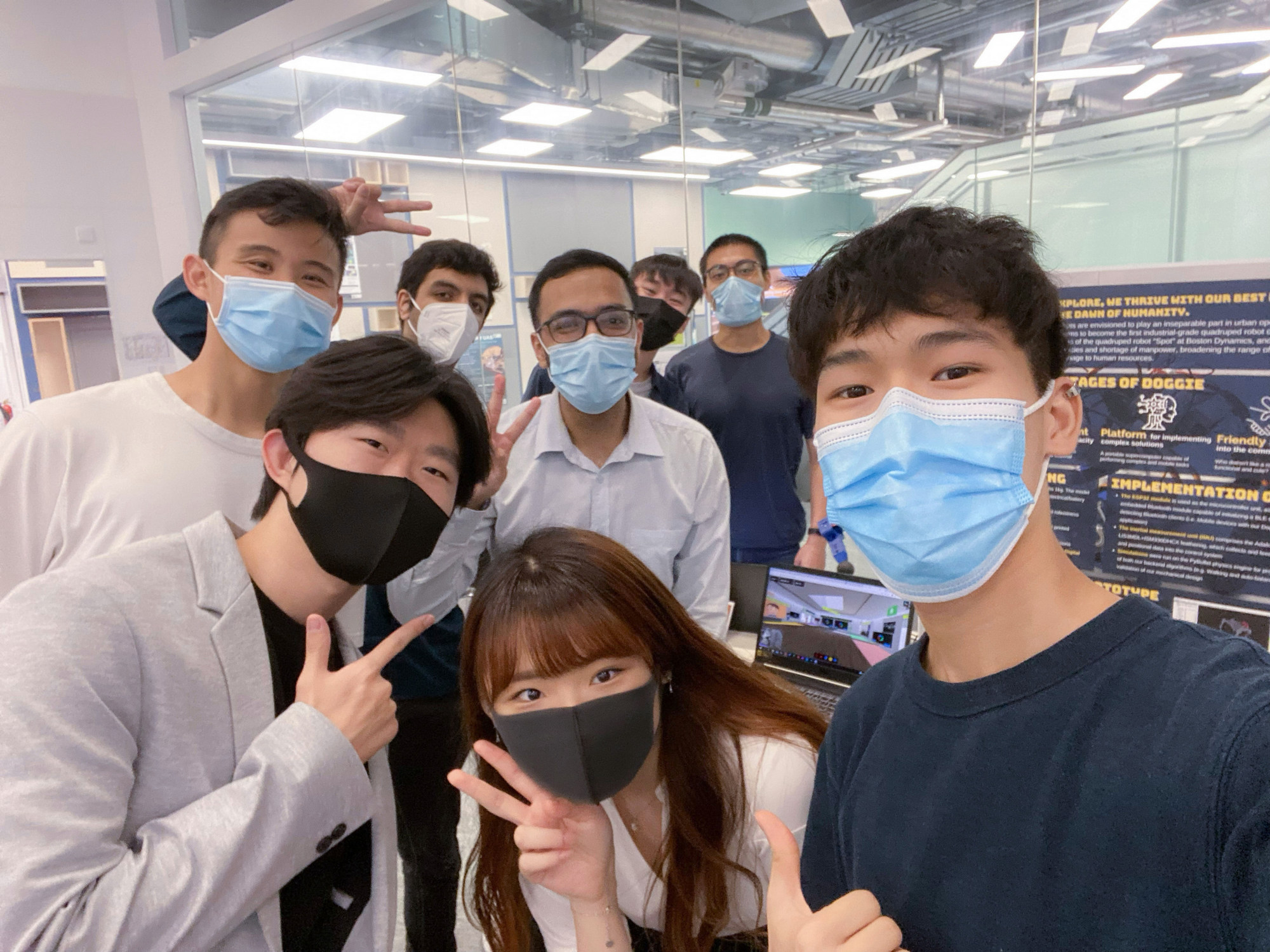 We aim to establish a hub based in the Innovation Wing where this development can take root in the local community, increasing awareness and interest while promoting scientific innovation.

Achievement
Press releases and featurings
And 20+ news articles and reports

Despite the advancement in robotics technology, the current tech industry is in void of a fish-like robot, capable of not just navigating through the complex and dynamic oceanic environment, but also performing real-life tasks like marine surveying as a bio-friendly entity. Started as a final year project in 2016 by Mr. Sidhant Gupta (HKU CE Graduate), the robotic fish project (initially named Project Vayu) has been a joint project led by the Department of Mechanical Engineering, co-supported by efforts of the Department of Electrical & Electronic Engineering and Computer Science of the Faculty of Engineering. 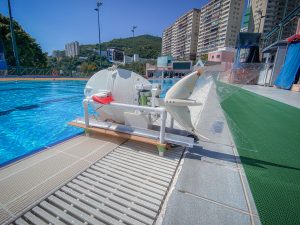 Since being taken up by Timothy Ng (HKU Mech MPhil) further development, the robotic fish set the first Guinness World Record of 26.79s for “The Fastest 50m Swim by a Robotic Fish” on January 23, 2020, and broke its own record once again of 22.92s in December 2020 under the name of its newest prototype – SNAPP.

The robo fish project gave birth to BREED HKU, a student-led robotics organization co-founded by Mr. Timothy Ng and Mr. Muhammed Saad Shahid Anwel (HKU CE Graduate) in 2019. Over the years, more than 40 undergrads from over 6 engineering disciplines and various faculties have contributed to the project, attaining accolades and making impact as an inter-disciplinary super team.

The robotic fish aims to cross the Victoria Harbour in October 2023, along with shattering another speed record. The event serves as a significant milestone to not just upkeep SNAPP’s record-breaking legacy but as a testiment of our expertise in creating bio-robotic solutions, which are robust enough to be applicable in real-world scenarios, and capable of tackling the society’s pain points. 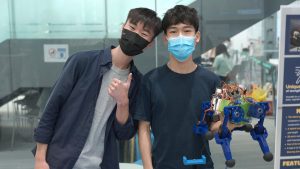 Quadruped robots are envisioned to play an inseparable part of urban operations under the new normal, to perform versatile errands like instant data-retrieval in inaccessible environments. They have been heavily researched and developed in recent years, offering optimal endurance, maneuverability and stability, as demonstrated by models in the market, like ANYmal C and the Alien go robot.

Synonymous to the body and the brain, robotics and AI live in duality. A robot must learn to perceive to interact with its environment, and without hardware, AI is simply a digital concept. This Robotics and AI (RAI) initiative aims to work with cutting edge machine learning technology and apply it to our very first robot dog: Doggi-E, allowing it to walk and navigate through HKU’s campus. 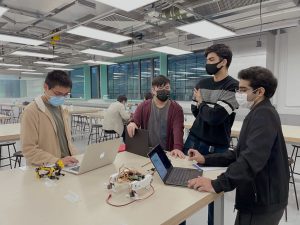 Our first prototype for DoggiE was built in 2021 by Mr. Ryan Chan (HKU ME graduate) as a STEM education project under the Department of Mechanical Engineering. In half a year’s time, it was soon developed into a working prototype capable of walking and squatting, while being controlled by a mobile application in half a year. The same model has won the “SUPER Good Job” Award after participating in Innovation Wing’s 6th Innoshow, due to its outstanding popularity among visitors.

DoggiE’s goal is to autonomously walk up a flight of stairs by the end of the 2022-23 school year, as an advancement towards real-world usage. A total of 4 DoggiE prototypes will be built in the coming year. The first prototype aims to refine walking mechanics. The second prototype provides stability for DoggiE when standing still and walking. The third prototype attains endurance with stable power output. The fourth will be the model capable of climbing stairs autonomously. 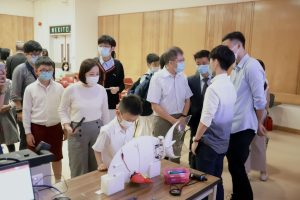 Co-organisers of the 2021-2022 STEM x Marine vehicles design/construction competition, where secondary and primary school students compete to build marine vehicles. BREED hosted the inaugural meeting and introduction of the robotic fish project in HKU on 3 November 2021.
​
On 19 March 2022, BREED hosted two workshops on constructing an underwater robot, including content on introduction to BREED and HKU, methods for implementing a propulsion system, and underwater chassis design theory. On 21,28 May and 4 June 2022 the speed competition and award ceremony respectively were held. BREED acted as the main co organizer, and gave demonstrations of the robotic fish as well as hosting talks.

The hackathon is a coding challenge using PyGame to introduce students to path-finding algorithms, letting them compete in creating a solution with the fastest time to cross “Victoria Harbor” with a virtual fish. Participants would need to program the fish to avoid obstacles and deal with the issue of a limited battery supply, while collecting bonus packages around the area.

This event was held throughout the summer during August, where BREED members created detailed tutorials on python programming, and acted as consultants to answer any technical difficulties throughout the event. 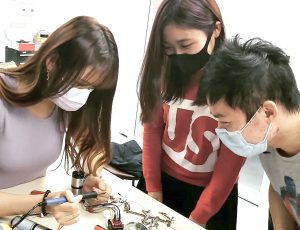 The BREED SIC was organized and carried out by a small group of tech leads to train the new generation of incoming members, acting as a credit-bearing course fully run by students in the inaugural program hosted by the Innovation Wing. The BREED course focused on the process of building a miniature robotic fish, using the same design concepts as the flagship robot to teach the fundamentals of robotic design.  A summary of the course learning outcomes can be found below:
​
Software: 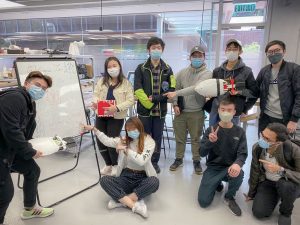 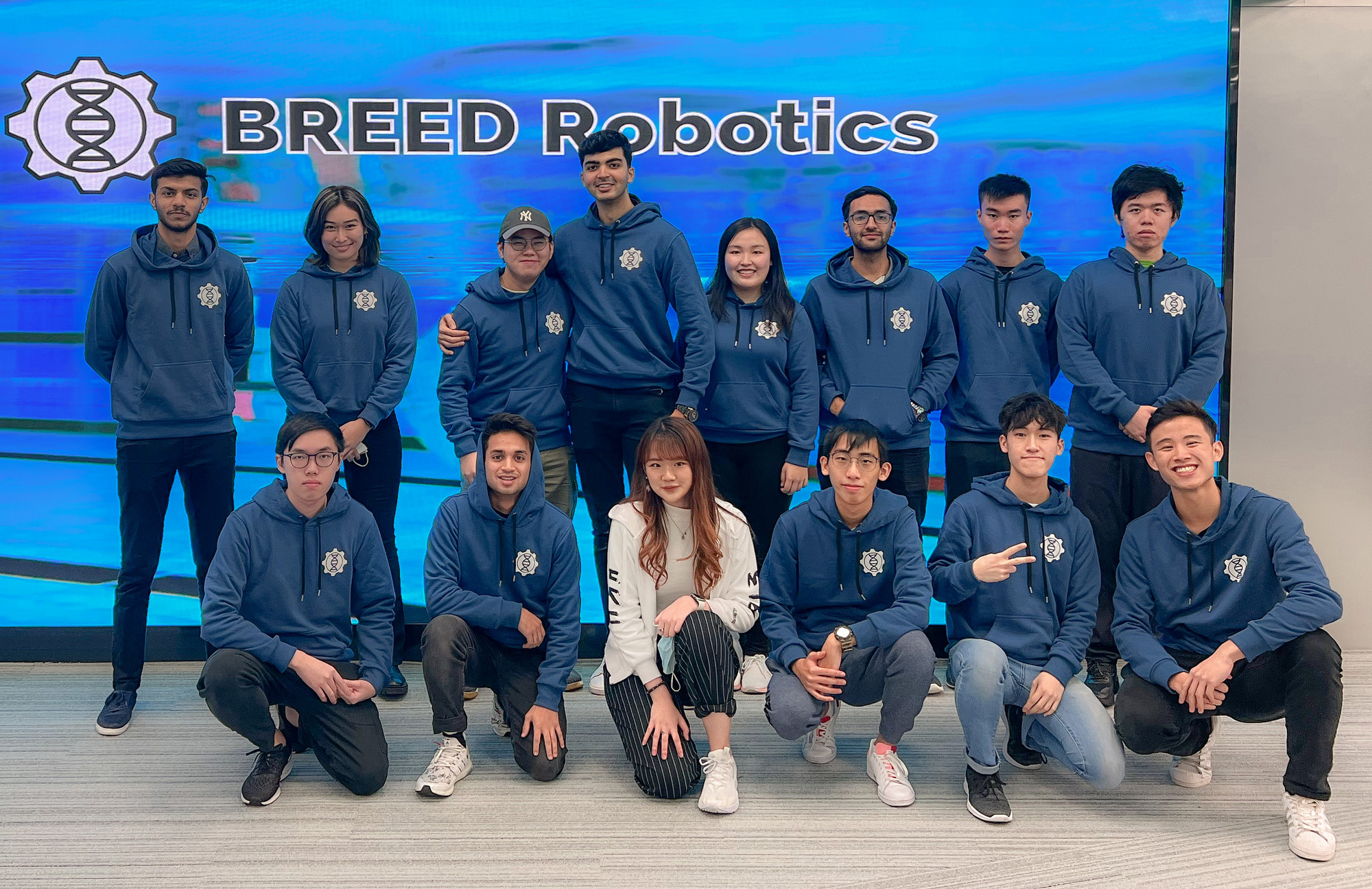 Come up with mechanical design solutions by improving the design and tackle problems, work on mechanical aspects of the fish including design, buoyancy, hydrodynamics.

Coming up with new solutions and areas to explore to improve the electrical design of the robotic projects. Work with the electrical components of the projects, including power delivery, power management, regulations, and circuit design. 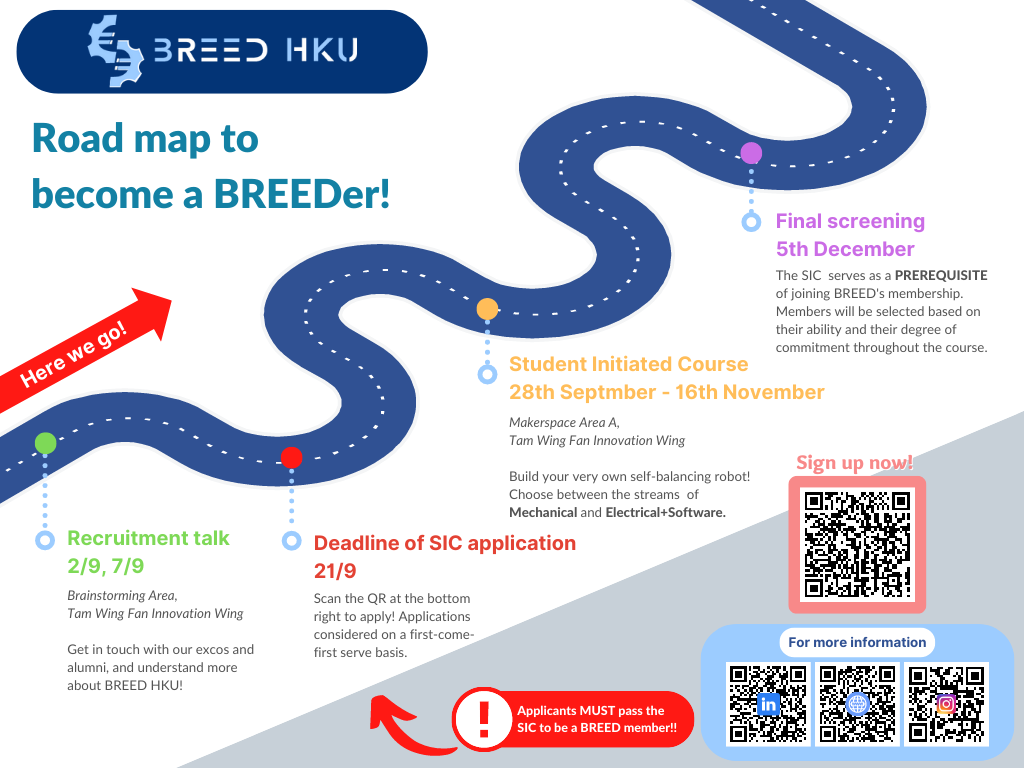