Magnetic resonance (MR) imaging (MRI) provides compelling features for the guidance of interventional procedures, including high-contrast soft tissue imaging, detailed visualization of physiological changes, and thermometry. Laser-based tumor ablation stands to benefit greatly from MRI guidance because 3D resection margins alongside thermal distributions can be evaluated in real time to protect critical structures while ensuring adequate resection margins. However, few studies have investigated the use of projection-based lasers like those for transoral laser microsurgery, potentially because dexterous laser steering is required at the ablation site, raising substantial challenges in the confined MRI bore and its strong magnetic field. Here, we propose an MR-safe soft robotic system for MRI-guided transoral laser microsurgery. Owing to its miniature size (Ø12 × 100 mm), inherent compliance, and five degrees of freedom, the soft robot ensures zero electromagnetic interference with MRI and enables safe and dexterous operation within the confined oral and pharyngeal cavities. The laser manipulator is rapidly fabricated with hybrid soft and hard structures and is powered by microvolume (<0.004 milliter) fluid flow to enable laser steering with enhanced stiffness and lowered hysteresis. A learning-based controller accommodates the inherent nonlinear robot actuation, which was validated with laser path-following tests. Submillimeter laser steering accuracy was demonstrated with a mean error < 0.20 mm. MRI compatibility testing demonstrated zero observable image artifacts during robot operation. Ex vivo tissue ablation and a cadaveric head-and-neck trial were carried out under MRI, where we employed MR thermometry to monitor the tissue ablation margin and thermal diffusion intraoperatively.

Novelty of the Project

Benefit to the Community

Ka-Wai Kwok received the B.Eng. and M.Phil. degrees from Department of Automation and Computer-aided Engineering, The Chinese University of Hong Kong in 2003 and 2005, respectively. He obtained the Ph.D. degree in computing from the Hamlyn Centre for Robotic Surgery, Department of Computing, Imperial College London in 2012. He is currently an Associate Professor at Department of Mechanical Engineering, The University of Hong Kong (HKU). Prior to joining HKU in 2014, he was awarded the Croucher Foundation Fellowship, which supported his research jointly supervised by advisors in The University of Georgia, and Brigham and Women’s Hospital, Harvard Medical School. His research interests focus on surgical robotics, intra-operative image processing, and their uses of intelligent systems. He has been involved in various designs of surgical robotic devices and interfaces for endoscopy, stereotactic and intra-cardiac catheter interventions. To date, he has co-authored with over 40 clinical fellows and over 80 engineering scientists. Many of his invention patents (>5) have been licensed or transferred from university to his medical industrial partners in support for their commercialization.

Dr. Kwok’s multidisciplinary work has been recognized by various international conference/journal paper awards (>10), e.g. the Best Conference Paper Award in 2018 IEEE International Conference on Robotics and Automation (ICRA). He also became the recipient of the Early Career Awards 2015/16 offered by Research Grants Council (RGC) of Hong Kong, as well as the IROS Toshio Fukuda Young Professional Award in 2020 IEEE/RSJ International Conference on Intelligent Robots and Systems (IROS), for his contributions to the advancement of MRI-guided robotic systems. He serves as Associate Editor for IROS 2017-20, ICRA 2019-21, Frontier in Robotics and AI, and Annals of Biomedical Engineering (ABME), Proc. IMechE Part I: Journal of Systems & Control Engineering (JSCE) and IEEE Robotics and Automation Magazine (RAM). He is the principal investigator of Group for Interventional Robotic and Imaging Systems (IRIS) at HKU. 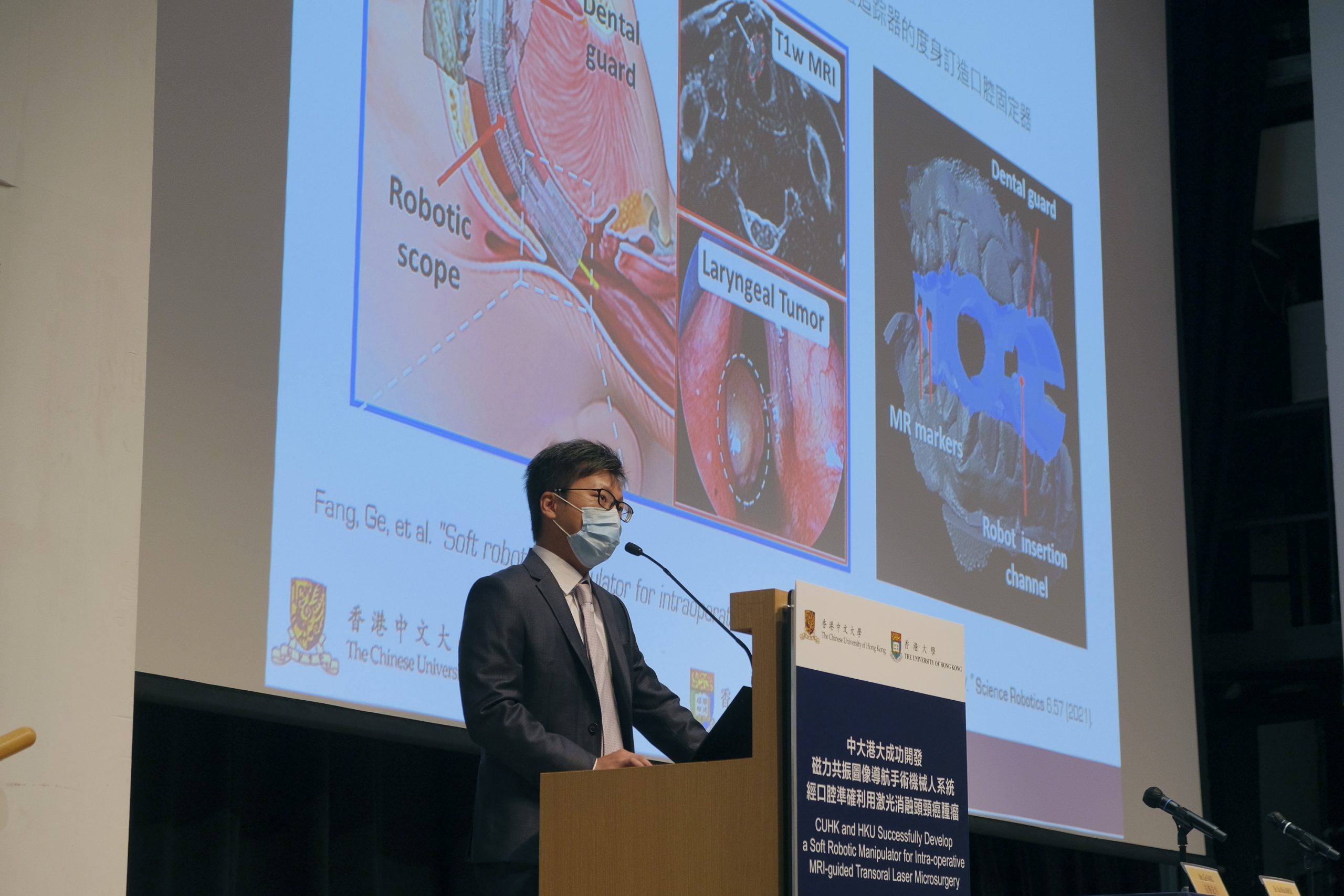 The press release article can be founded in HKU Press release (https://www.hku.hk/press/news_detail_23227.html)

A joint research team from The Chinese University of Hong Kong (CUHK) and The University of Hong Kong (HKU) has recently developed a soft robotic manipulator for transoral laser microsurgery on head and neck cancer, guided by intra-operative magnetic resonance (MR) imaging (MRI). Researchers from the Department of Otorhinolaryngology, Head and Neck Surgery, Faculty of Medicine, CUHK (CU Medicine), together with the Department of Mechanical Engineering, Faculty of Engineering, and the Faculty of Dentistry, both from HKU, collaborated to develop this novel MR-safe system in miniature size, with compliant architecture and five degrees of freedom, which enables safe and dexterous laser ablation within the confined spaces of the oral and pharyngeal cavities. Ex-vivo tissue ablation and a cadaveric head-and-neck trial were carried out under MRI, demonstrating that the system can utilise MR thermometry to precisely monitor the tissue ablation margin and thermal diffusion during the procedure. This innovation has just been reported in the international journal Science Robotics.

Challenges in applying MRI-guided laser ablative therapy to transoral microsurgery
Head and neck cancer generally refers to cancers in areas including the oral cavity, laryngopharynx, nasopharynx and nasal cavity. It is the seventh most common cancer in the world causing 450,000 deaths every year.

Laser ablative therapy has been used for treating head and neck cancers. However, the conventional treatment system remains challenging at times in treating oropharyngeal and laryngeal tumours, which requires extreme positioning including retraction of the tongue, opening of the mouth and/or extension of the neck of patients to achieve adequate tumour exposure for laser delivery. Meanwhile, laser-based tumour ablation stands to benefit greatly from MRI guidance as 3D ablation margins alongside thermal distributions can be evaluated in real time to protect critical neurovascular structures as well as to ensure adequate ablation margins. But to apply transoral laser microsurgery in an MRI environment, there are substantial challenges in the confines of the MRI bore and its strong magnetic field (1.5/3T), where conventional metallic robot components cannot be applied.

Features of the novel soft robotic system
Through close collaboration between clinicians and engineers, the team developed an MR-safe soft robotic system. It is a novel robotic platform that is able to use real-time intra-operative MRI guidance together with continuous control of laser beam projection for tumour ablation. The robot integrated with a laser fibre enables endoscopic intervention through a patient-specific dental anchorage in the oral cavity, and directs energy delivery to the target lesion. MRI-guided transoral laser microsurgery can be performed by the system which has the following unique features:

Experimental validation of intra-operative MRI-guided robotic laser ablation on ex-vivo tissue and cadaveric oropharyngeal tissue was carried out. The results showed that the robot achieved precision in an automated path following the laser spot along a trajectory defined by the surgeon.

Dr. Jason Ying Kuen CHAN, Associate Professor, Department of Otorhinolaryngology, Head and Neck Surgery at CU Medicine, stated, “The system enabled direct exposure of the ablation laser to the target lesion, without the need for positioning patients with extreme neck extension to accommodate rigid laser micromanipulators. Together with MRI guidance, clinicians could give intuitive and precise feedback of the ablation process, which is critical for function preservation of surrounding structures.”

For future work, the team is planning to further reduce the robot size. Dr. Ka Wai KWOK, Associate Professor, Department of Mechanical Engineering, Faculty of Engineering at HKU, added, “By miniaturising its size, it will be possible for the robot to access more confined sites such as the nasal cavity and sinus cavity. We will also implement some specific image sequences so that the images can be fed back to the robot in a faster way.”

Please feel free to give your enquiry / feedbacks to the research team by filling the form (https://forms.gle/Us2icw1yV2FNrPdG9). Thank you! 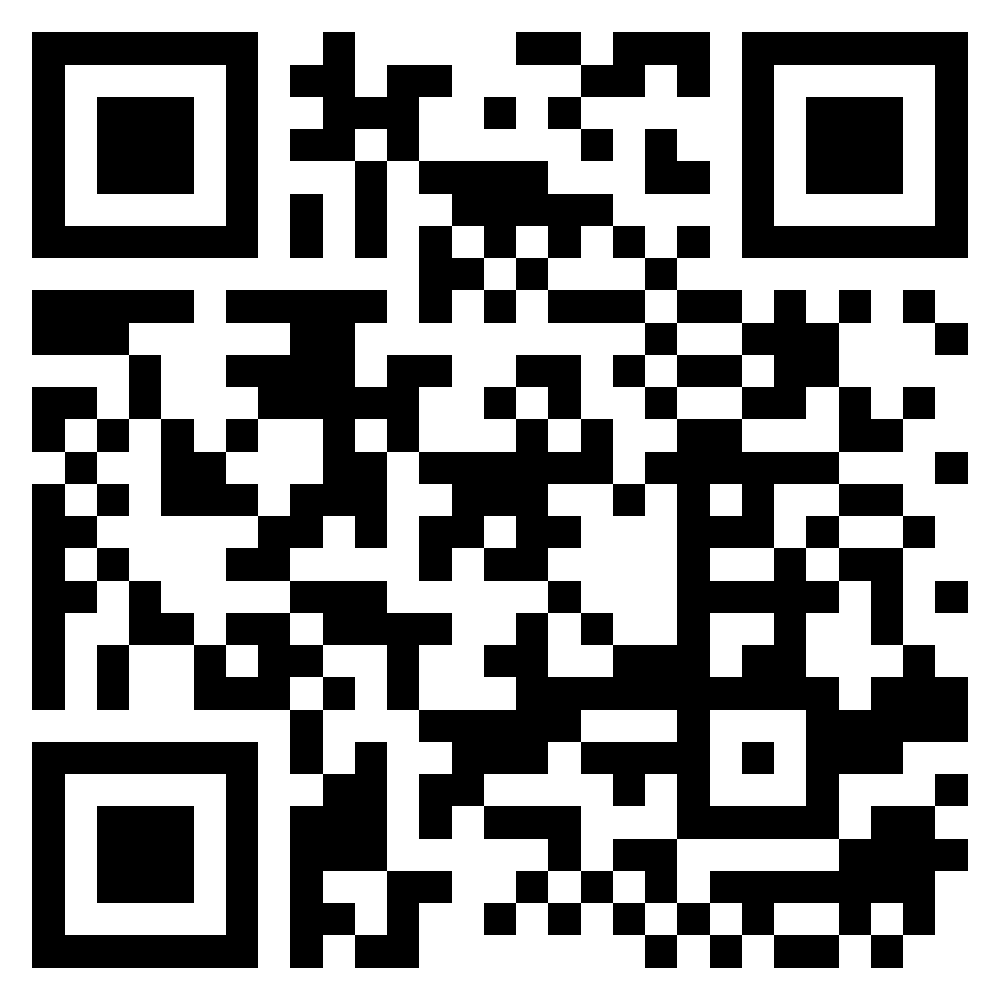